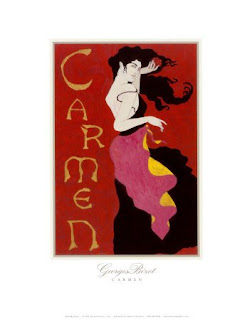 Went to the Edmonton Opera's presentation of Bizet's Modernist Opera; Carmen last night. It's one of my fav's. it's an opera that has all of my favorite themes; the rise of the proletariat who are cigarette factory girls, who smoked on stage, wanted to light one up in solidarity.

Carmen is a scarlet woman, a gypsy and a witch, she is an independent proto-feminist declaring her belief in free love. She is a threat to the patriarchal male and thus she must be destroyed. It was a social statement that still carries much meaning even today.

And it's an Opera that has more hit singles than the average rock n roll album.

The opera was premiered at the Opéra Comique of Paris on March 3, 1875. For a year after its premiere, it was considered a failure, denounced by critics as "immoral" and "superficial".

The story concerns the eponymous Carmen, a beautiful gypsy with a fiery temper. Free with her love, she woos the corporal Don José, an inexperienced soldier. Their relationship leads to his rejection of his former love, mutiny against his superior, turn to a criminal life, and ultimate jealous murder of Carmen. Although he is briefly happy with Carmen, he falls into madness when she turns from him to the bullfighter Escamillo.

Georges Bizet’s opera, Carmen, is one of the most beloved operas of all-time. It is a French opera with a libretto by Henry Meilhac and Ludovic Halévy that is based on the novel by the same name, written by author Prosper Mérimée. Bizet found great opposition to the work, as many at the time found the plot of the opera to be “immoral.” Carmen, first performed in 1875 at the Opéra-Comique in Paris in 1875, broke new dramatic ground for French opera as it moved away from opera buffa, or comic opera, towards a more profound and tragic story. Bizet did not live to see that his work, once highly controversial, was to become one of the most often performed operas in the world.

Most people, if they get the chance, have to settle for one great achievement in the cultural arena. Not for Malcolm McLaren. Besides being an imperialistic cultural plunderer (a non-judgmental designation), he is one of rock's true visionaries. His role in the formation and promotion of the Sex Pistols has been construed as everything from inspired instigator to Machiavellian manipulator, and his solo career has been as influential as it has been criticized: he tends to bring out the moral indignation in people. A brilliant carpetbagger whose precise talents — beyond aestheticism and the canny ability to peg influential trends in a wide panorama (fashion, retail, politics, music, art, film, literature) early enough to exploit them as a pioneer rather than a bandwagon-jumper — are difficult to pin down, McLaren has made himself the star of his own entrepreneurial undertakings. Despite the odds stacked against him mounting a successful recording career (that he's not exactly a musician is high on the problems list), McLaren has crafted a bizarrely significant oeuvre of high-concept adventures. It's hard to say just what McLaren does as an artist. He's more an assembler than a creator, piecing together artifacts from various musical cultures in such a way that, at the end of the day, his own input seems invisible. And yet his perspective as hip outsider has continued to provide a link between his Anglo-American audience and Third World forms. If McLaren's a musical tourist, these records are his home movies.

His next venture was exponentially more improbable. Feeding classic opera into a hip-hop blender, McLaren came up with the surprisingly entertaining Fans. McLaren mainly uses opera for its recitative form and story lines (namely Carmen, Madam Butterfly and Turandot) and, damn it, the thing works more often than not.

When Luciano Pavarotti recently passed away, opera lost not only a magnificent voice, but also an ambassador. While the average person (myself included) has a limited knowledge of opera, the world knew Pavarotti. Millions of people watched “The Three Tenors”, whether in thrilling live performances or via video and television. But Pavarotti also stepped out of the opera world to enter the realm of pop culture. Take a jog through the internet and you’ll find performances with James Brown, U2 and the Spice Girls. His various television appearances include Saturday Night Live and he even starred in a movie (the critically lambasted film “Yes, Giorgio”). And that got me thinking about an experiment that tried to weld together opera and pop culture.
In 1984, the single “Madame Butterfly” hit the Top Twenty charts in England and with it, the release called “Fans”. The mastermind behind “Fans” was Malcolm McLaren, an artist who had a bit of notoriety in his career. McLaren was the manager of the Sex Pistols and depending on the point of view, was involved with the formation and promotion of the band. Malcolm also handled Adam Ant, raiding his backing band to put together Bow Wow Wow. But when the 1980s rolled around, McLaren decided to become an artist himself.
“Fans” was an interesting hybrid of opera and hip-hop. This was hip-hop circa 1984 and he relied more on the beat than anything. With the hip-hop backdrop, McLaren would mix it together with the story line and arias of famous operas. Simple programmed drum beats along with a synthesized melody and an operatic soprano or tenor floating on top of it.
“Fans” was a fairly short undertaking as the album consisted of only six tracks clocking in at just over 30 minutes. McLaren stayed with familiar operas with five of the tracks based on Puccini operas (two from “Madame Butterfly”) while the remaining track used Bizet’s “Carmen” as a starting point. To further flesh out the album, McLaren adapted the storylines into English, then personally provided narration (he left the actual singing to the professionals) as he takes the role of several characters.

In hindsight, opera and hip-hop seem to be a good match because of the element of tragedy that exists in both. However, the overall experiment turned out to be a partial success, mostly in England. The single “Madame Butterfly” received some praise from the critics and as earlier mentioned, was also a hit. However, critics weren’t as nice about “Fans”, considering it simply padding for the single. That wouldn’t stop McLaren from continuing his musical career as he had a few more hits in the U.K. although he left opera behind.

The concept of the East Village Opera Company is totally fresh, but not unprecedented in pop. In 1985, for example, former punk-rock impresario Malcolm McLaren released Fans, an album of "hip-hopera" that brought funky beats and electronic programming to the works of Puccini and Bizet. But EVOC is a whole new thing: an integrated, eleven-strong working band dedicated to rocking the opera and electrifying the classics, as the ensemble has been doing to spectacular effect ever since its New York stage debut in the spring of 2004.