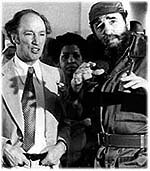 David Suzuki covers the Cuban Green Revolution in his TV Series the Nature of Things. Rather timely it should show this week. Proving that the revolution in Cuba is alive and kicking, regardless of the embargo by the US and the declining health of el presidente.

Cuba: The Accidental Revolution are two one-hour documentaries celebrating the country's success in providing for itself in the face of a massive economic crisis, and how its latest revolutions, an agricultural revolution and a revolution in science and medicine are having repercussions around the world.

Without fertilizer and pesticides, Cubans turned to organic methods. Without fuel and machinery parts, Cubans turned to oxen. Without fuel to transport food, Cubans started to grow food in the cities where it is consumed. Urban gardens were established in vacant lots, school playgrounds, patios and back yards. As a result Cuba created the largest program in sustainable agriculture ever undertaken. By 1999 Cuba's agricultural production had recovered and in some cases reached historic levels.

It is this adaptablitiy of the Cuban State that will allow it to survive the eventual death of Castro. And no it won't turn reactionary and collapse into Mafia Capitalism like the Soviet Union did. Despite the rhetoric about the 'Castro dictatorship' the Cuban revolution is still a 'Peoples Revolution', and the people will defend their gains.

An eye-witness look at pre/post-revolution Cuba:
Recently Cuban dictator Fidel Castro temporarily handed power over to his brother, Raul, while he underwent surgery and recuperation from intestinal problems. As the news media reviews the legacy and rule of Fidel Castro, now would be a good time to look a that legacy from the point-of-view of one who lived in Cuba pre- and post-revolution. Oscar Ramírez-Orbea is one who grew up pre-revolution and saw all that his family work hard for be taken by the Communists under Castro.

As the title suggests, this book is bi-lingual, written by a professor who actually was born and raised in Cuba and fled Cuba as a boy with his family. The Ramírez-Orbea family lost all they had worked for when Castro seized private property "for the common good."

About family, love, relationships, and survival in difficult circumstances in Cuba's pre and post revolution of the 1950's and 60's. A collection of 14 short stories, all in Spanish and English, based on the author’s experiences of childhood before and after the Communist revolution. Lots of nostalgia for those who knew Cuba in the 50’s and 60’s and plenty of humor for readers in general. Includes also many period family photographs that illustrate the stories and bring them vividly to life! and lots of detail of a life gone that all readers will find to be a wonderful reading experience

See more about the book at:
http://cubairememberyou.zoomshare.com/

Dr. Oscar M. Ramírez-Orbea, was born in Camagüey, Cuba, in 1955. He emigrated with his family to the US in 1966, after completing elementary school in his home country. He longs one day to return to his native city of Camagüey and to all the fond memories it holds for him. CUBA, I REMEMBER YOU/CUBA, TE RECUERDO is Dr. Ramírez’s first narrative work.

New work by the same author, published and in bookstores by winter of 2007:

Cuba, Between History and Legend

A collection of short stories based on Cuban legends and unusual histories, all told in thoroughly original and creative ways. All stories are narrated in English and Spanish on facing pages. Includes also substantial background information on the actual events on which the stories are based, as well as references for follow-up reading, and historical illustrations for all the stories. For brief descriptions of the stories, go to www.cubairememberyou.zoomshare.com On the market by year’s end. Cuba … like you’ve never read it before!