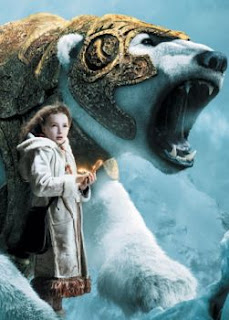 You would think that those who want to censor books and movies would learn that it always backfires and simply acts as a form of advertising for the particular work in question.

The Dufferin-Peel Catholic board is conducting an informal review of The Golden Compass because concerns have been raised about the children's fantasy book in the neighbouring Halton board.

"It warrants us having a look at it," said community relations manager Bruce Campbell, adding staff members have been assigned to read the book and basically provide a plot synopsis "so we understand what it's about."

The Halton Catholic District School Board has pulled The Golden Compass – an award-winning book set to be released as a major motion picture next month – from library shelves after a complaint.

The other two books in the trilogy by British author Philip Pullman, which have been compared to the Harry Potter series, are also off the shelves for now, but available if students ask for them.

The Halton board is convening a committee to review the book and recommend whether it should be available to children.

Halton Catholic elementary principals were directed not to distribute the December Scholastic flyer because The Golden Compass is available to order.

A board-issued memo says the books are "apparently written by an atheist where the characters and text are anti-God, anti-Catholic and anti-religion."

In the U.S., Catholic groups are urging a boycott of the movie and accuse the books of being anti-Christian and promoting atheism. 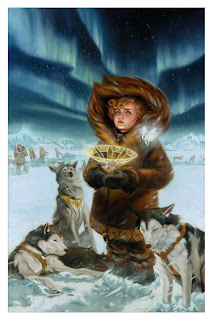 whose god they are opposed to. Thus to claim the author is Anti-Christian misses the point, if he is Anti-GOD, anti-theism,he is Anti-Muslim, Anti-Judaic, Anti-Buddhist,Anti-Hindu, Anti-Giant Flying Spaghetti Monster, Anti-Cuthulu, etc. etc.

It is a fantasy novel. Get over it.

And as long as public funds pay for Catholic Schools then they are 'public' schools and should not be allowed to censor 'publicly' available reading materials. If you want papal dispensation for your library you can always go private.

Of course in the U.S. they are private schools. And so this is another political campaign by the right wing fundamentalist lobby from the U.S. And of course the atheist threat is much exaggerated as we find out in this article from the Boston Globe. Mr. Kaufman is more of a religious antiestablishmentarian than an atheist. But to the Catholic church it is all heresy.

ON DEC. 7 New Line Cinema will release "The Golden Compass," starring Nicole Kidman and Daniel Craig, the first movie in a trilogy with the massive budget and family blockbuster potential of "The Lord of the Rings."

Yet, even before it opens, "The Golden Compass" finds itself at the center of a controversy. The Catholic League, a conservative religious organization, launched a campaign on Oct. 9 calling on all Catholics to boycott the film. The group also published a lengthy pamphlet attacking the story and distributed the pamphlet to Catholic schools across the country. Other groups have joined the fray, including the evangelical nonprofit Focus on the Family, whose magazine Plugged In urged parents to keep kids out of theaters showing the film. And the Christian blogosphere is alive with warnings not only about the movie trilogy, but also about the series of books it is based on.

Bill Donohue, president of the Catholic League, charges that the books, known as the "His Dark Materials" trilogy, are deeply anti-Christian. Donohue says he fears that the film will inspire parents to purchase "His Dark Materials" for their fantasy-hungry kids on Christmas, unaware that the third book of the series, "The Amber Spyglass," climaxes in an epic battle to destroy God. Some of the book's villains are referred to as the Magisterium - a term used to refer to the Catholic hierarchy. The British author, Philip Pullman, has said openly that he is an atheist, and Donohue charges that his books are designed to eradicate faith among children.

But this is a sad misreading of the trilogy. These books are deeply theological, and deeply Christian in their theology. The universe of "His Dark Materials" is permeated by a God in love with creation, who watches out for the meekest of all beings - the poor, the marginalized, and the lost. It is a God who yearns to be loved through our respect for the body, the earth, and through our lives in the here and now. This is a rejection of the more classical notion of a detached, transcendent God, but I am a Catholic theologian, and reading this fantasy trilogy enhanced my sense of the divine, of virtue, of the soul, of my faith in God.

And of course the novel and the movie has witches in it, which is always a good reason for Christian fundamentalists to bash fantasy novels.

Witches who rule the northern skies and creatures that manifest themselves as people’s souls have been brought to life by the latest special effects in The Golden Compass, the year’s most eagerly awaited film. These are shown here for the first time after Philip Pullman declared that the screen version of his classic story lived up to what he was trying to achieve when he put pen to paper.

And while the Toronto Star Article first quoted above about the Dufferin school district claims that the author confesses he wants to 'Kill God' here is what he really said.

One movie getting maximum publicity is "The Golden Compass," starring megastars Nicole Kidman and Daniel Craig. The film opens Dec. 7, and what a film it is for the Christmas season.

Cineastes should know it is an adaptation of the first volume of Philip Pullman's "His Dark Materials" trilogy. Though Mr. Pullman's sales don't come close to those of J.K. Rowling of Harry Potter fame, they are well into the millions. A literate and gifted author, he is not conventional regarding religious matters.

If you want the full, fascinating details of why you might not put his works at the top of Santa's list for young children, check out the well-documented article "How Hollywood Saved God," by Hanna Rosin, in the December Atlantic.

In the first paragraph, Miss Rosin quotes Mr. Pullman referring to C.S. Lewis' classic Chronicles of Narnia children's series as "morally loathsome." He also told her that his work was Narnia's moral opposite: "That's the Christian one. And mine is the non-Christian one." Despite his take on religion, Mr. Pullman's stories are marvelously inventive.

And when you dig underneath the political discourse it always all about equating the 'other' religion or even anti-religion as being a lure of Satan.

One of my favorite writers and philosophers, Joseph Campbell, says in his tome Hero With a Thousand Faces, "It is possible to speak from only one point at a time, but that does not invalidate the insights of the rest," and I find that quote particularly relevant in any discussion of The Golden Compass. Does Pullman's exploration of his own ideas around organized religion invalidate the insights of Christianity? The truth is, this is more than a movie, it's a representation of a particular world-view and set of ideas. If it wasn't, it would matter neither to the Christians who consider it a heretical tool to lure children into Atheism (I guess that makes Atheism the new Satanism) that the film exists, nor to the Atheists that New Line has reportedly watered down author Philip Pullman's ideas to make it more palatable to the Christian Right. But does the fact that the film is about religion mean that people of faith shouldn't see it and discuss it?

And if you ask early Gnostic Christians about that they will tell you the Devil is in the details.

Out Of The Hogwarts Broom Closet

The Ethnic Cleansing of Satanists

The War Against Secular Society

Posted by EUGENE PLAWIUK at 1:52 AM