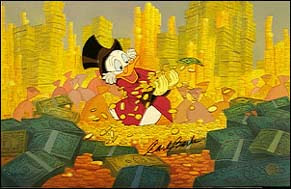 Another myth about competition lowering costs to consumers bites the dust. Give business a break and they will take it, while still screwing you and me.

And while our prices are cheaper than in the U.S. you and I are in effect subsidizing generic drug manufacturers in Canada.

The benefits of strong competition in Canada's generic drug sector are not finding their way into consumers' pocketbooks, Canada's Competition Bureau said in a report released on Monday.

The report found that one of the reasons generic drugs are more expensive in Canada than other countries is the existence of a rebate system that discourages pharmacies from passing along savings to customers.

In most of Canada's provinces, drug manufacturers compete with each other by offering pharmacies rebates of an average 40 percent off the invoice price as an incentive for the retailers to choose their products, the bureau said.

But the rebates are typically not reflected in the prices that consumers pay for drugs.

"They're giving (pharmacies) a break," Commissioner of Competition Sheridan Scott said in response to reporters' questions at a press conference. "That's a normal thing. The question is, why is the money staying at the pharmacy level."

The study found that the rebate system gives manufacturers little incentive to compete through lower prices.

And these are the same guys who whine about unfair competition from the Big Pharma establishment. They are as much a part of Big Pharma as the established drug companies. Horse of a different colour.

The Mound of Sound said...

Gene, you're dead right on this one. My brother is a licensed drug dealer who likes to opine how pharmacists are genuine professionals. This rebate issue popped up in a conversation recently. I argued that any legitimate professional stands in a fiduciary relationship with his client/patient,customer in which taking undisclosed financial incentives is prohibited. When a pharma gets a customer to accept a generic the relationship requires the druggist to disclose the rebate factor. Otherwise the pharmacist can be placing himself in a direct conflict of interest with his customer in breach of his fiduciary obligation. Naturally the "professional" took this as a great affront.

So? This only might mean something if drug availablity and/or quality and/or innovation was equal to or below that of the healthcare system in general.

"That's a normal thing. The question is, why is the money staying at the pharmacy level."

There are perhaps a couple rationales...