How Do You Spell Sell Out?

In Alberta workers are fighting to change our regressive labour laws to allow the right to strike which was recognized this summer by the Supreme Court. In Ontario workers are being sold out by once progressive talking union leader Buzz Hargrove. All so he can increase his declining membership and assure his pork choppers their salaries. It is sending a chill through out the Canadian labour movement.

Hey maybe Buzz would like to move to Alberta, since the bosses here would love this kind of agreement. In fact thats why CLAC is so popular with employers out here. So what's the difference between CAW and the employee management consultants from CLAC....nothing.

If workers vote in favour of the CAW and the contract at their plant, any subsequent collective bargaining disputes would be resolved through binding arbitration rather than a walkout by the union or a lockout by the company.

The fundamental right to withdraw labour is a provision that unions have protected vigorously for decades as its only ultimate power against management.

But the CAW's decision to give up the right to strike triggered criticism from other labour leaders.

"It's a pretty drastic measure and ultimately is not good for workers because they no longer have the right to withdraw their labour," said Wayne Samuelson, president of the Ontario Federation of Labour.

"It's pretty fundamental to the labour movement and collective bargaining. This is not good, especially if it's exchanged for voluntary recognition of the union. It certainly sets a precedent that working people need to be concerned about."

Hargrove said it wouldn't be possible for other auto-parts companies with a union to demand the same provision. However, a non-union employer could get a similar arrangement, he said. "Invite us in."

Hargrove recognizes the need for his business union to adapt to modern business practices, mergers and acquisitions to expand the base of capital (union dues). This began when CAW raided SEIU for its members, claiming it was doing it in the name of democratic social unionism. Which got CAW temporarily removed from the CLC. AUPE in Alberta followed CAW's lead and left the AFL and CLC declaring itself an indepedent union, with support from Buzz.

Neither of these moves were not about democracy or workers rights, since both unions have hired staff and their own management structures. Rather it was about money. In the CAW's case busting a rival union and gaining its members, in AUPE's case retaining affiliation fees they could use themselves.

Now Buzz has gone even further with the potential of 20,000 dues paying workers with a forced dues check off, the Rand Formula, and no right to strike, he will be able to use those funds to balance the books as more attrition hits the auto sector and more of his members retire.

It's a cynical and shallow motive but one that should be expected by business unions that no longer see their purpose as overthrowing capitalism but as getting their members the best deal they can under capitalism.

Once upon a time unions like CAW and others called themselves Social Unions
somehow different from their American International business union counterparts. They were about fighting globalization and neo-liberalism. Buzz has repeatedly claimed he is left wing. Yep the left wing of capitalism.

Today the CAW as I predicted, is all about adapting to globalization and neo-liberalism in order to give Canadian corporations a fighting chance in the world market.

This is not unlike the recent mergers of the International Transportation and Steel unions and other international unions that are facing declining memberships and lack of bargaining power.

Once again the unions show they are merely an extension of capitalism not an alternative to it.

That alternative exists and it is Revolutionary Syndicalism that was birthed with the IWW over a hundred years ago. 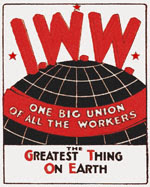 The employing class and the working class have nothing in common."
Preamble to the IWW Constitution

"When the working class unites, there will be a lot of jobless labor leaders."
Eugene Debs, 1905 speech to the IWW Convention

Unions the State and Capital

Global Labour in the Age of Empire

WHITHER SOCIAL DEMOCRACY?
THE CRISIS OF CAPITALISM, LABOUR AND THE NDP
A SOCIALIST PERSPECTIVE

This is Class War

Nice one! This post is amazing and very important. Visit Pro Civil Engineer Thanks for sharing.