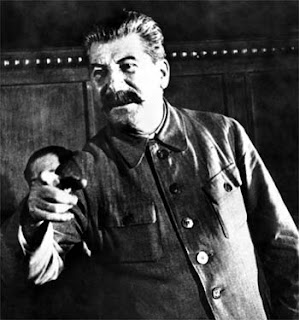 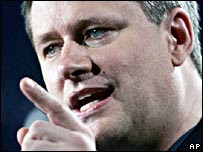 Since winning power in 2006, albeit as a minority government, Stephen Harper has been set on gaining a majority to keep HIM in power as PM. That first summer his reading included a biography of Stalin, the Man of Steel.
And like Stalin his recent political machinations reminded me of the intriques in the Bolshevik Party as Stalin played off alliances of Trotsky, Zinoviev, Kamenev, Radek, Bukharin, and other central committee and politburo members, against each other to maintain power.
In porouging parliment he saved his job and his government...for the moment.
And despite his protestations about saving demoracy, his actions are the opposite. Which is typical of the right wing, who use language to mean its opposite. For instance Freedom of Information acts passed by right wing governments are anything but that, they actually limit freedom of informantion and access. Just as the Harperocrites transperancy and accountability act is anything but.
And right wing parties manufacture political crisises in order to create the conditions to either take power or stay in power.
So when Harper talks about democracy he means something other than parlimentary democracy. Rather he looks south and want to create a PMO with the power of the U.S. Presidency.

"The Canadian government has always been chosen by the people," the prime minister declared in his mid-week televised address to the country.
But now, he told viewers, a coalition of opposition parties is trying to oust him through a backroom deal "without your say, without your consent and without your vote."
Just how valid is Harper's claim that changing governments without a new election would be undemocratic?
"It's politics, it's pure rhetoric," said Ned Franks, a retired Queen's University expert on parliamentary affairs. "Everything that's been happening is both legal and constitutional."
Other scholars are virtually unanimous in their agreement. They say Harper's populist theory of democracy is more suited to a U.S.-style presidential system, in which voters cast ballots directly for a national leader, than it is to Canadian parliamentary democracy.
"He's appealing to people who learned their civics from American television," said Henry Jacek, a political scientist at McMaster University.
In Canada, there's no national vote for prime minister. People elect MPs in 308 ridings, and a government holds power only as long as it has the support of a majority of those MPs.
"We have a rule that the licence to govern is having the confidence of the House of Commons," said Peter Russell, a former University of Toronto professor and adviser to past governors general.
"I'm sorry, that's the rule. If they want to change it to having a public opinion poll, we'd have to reform and rewrite our Constitution."

If we are to understand the current political situation and how we got here we have to review Harpers rise to power. Firstly he left the Reform Party as a short lived MP, having been a former assistant to its first MP Deborah Grey. He had an ego that would not let him work with Preston Manning then Reform Party leader who is a prairie populist. Harper however comes from the Calgary School, a modern neo-con politick influenced by Reagan/Gingrich Republicanism, and the authoritarian ideology of Carl Schmitt and Leo Strauss. Several members of the Calgary School being ex-pat Americans.
The new conservative movement sled by Harper shed its populist appeal, and its base, while maintaining the language of reform to appeal to that base. Under the tutelage of Calgary School mandrin Tom Flanagan. the object was not Preston's agenda to reform Canadian politics, but to gain power and destroy their main opponent the Liberal Party. It was to hold power at all costs, first and foremost, democratic reform was abandoned for the politics of right wing political economic social engineering, to transform the state in Canada into a Republican lite government. In order to do this it was required to Unite the Right.
With the failure of the Reform Party and Canadian Alliance to do this, it was clear that a strong man, a man of steel, would be needed to bind the disparte right wing base together into a party capable of winning an election and begin the process of defeating and destroying the Liberal Party, Canada's Natural Governing Party, andultimately what these ex-American politicos hate most the liberal social democratic Canadian State.

This was the same agenda of the Gingrich Republicans and their Contract With America, to defeat forever the Democrats, who had been the Natural Governing Party in the United States.
With Harpers win of the leadership of the newly minted Conservative Party, which intigrated the Canadian Alliance with the old Progressive Conservative Party, purging the progressives and populist Reformers, the Republican Revolution model of politics was adapted to Canada.
The arrogance of the Liberals was finally met with an arrogant Conservative leader set with and agenda to seize power and destroy them once and for all. No other Canadian politician had ever been elected to parliment like Harper. None of the previous Conservative PM's had ever viewed taking power to mean destroying their political opposition.

This should have been clear to the Liberals, but in their arrogance as the Natural Ruling Party they chaose instead to view their defeat in 2006 as the fault of the internal clash between Paul Martin and Jean Chretien. A clash that had led to Martin gaining a minority government bequethed with a Chretien era scandal. Even after Martin's defeat the party failed to realize how serious Harper was about his mission and political agenda to destroy them.
In their arrogance they held a six month leadership race complete with supposed party revitalization discussions. The latter ended up on the cutting room floor. The former was hotly contested, and included a front runner, Michael Ignatieff, brought from Harvard to battle the Calgary School boys. Unfortunately the race which got nasty ended in a lame duck choice; Stephane Dion, whom nobody really wanted, but appeared at th moment to unite the party as the best of a bad lot. Again the failures and foibles of all the leadership candidates were exposed for all Canadians to see, and their words used in the leadership debates would come back to haunt them.

Faced with a united opposition, a coalition prepared to govern in his stead, who had already let the Govenor General know that, he began another election campaign. With coffers full of donations, he launched his so called defense of democracy, note well not defense of Parliment, but of that American abstract notion of democracy, one person one vote.

Not willing to face the wrath of the house he approached the GG to porouge parliment, to live to fight another day. While he accused the opposition of courting a coup with their coalition, he in fact conducted a parlimentary putsch yesterday to stay in power for another seven weeks.And he did so not for the good of Canada, or the Canadian people, nor even for the good of his own party. He has no plan to deal with the recession and its spiral into depression, rather he will use the seven weeks to run yet another election campaign against the Liberals.
The Liberals mistake and the cracks are showing now with dissident MP's denoucning Dion, was to not have demanded Dion step down and appoint an interm leader to be the PM in a coalition government.
That option remains open. Or they could make Jack PM. Not likely.
So let us recap the Harper government is a minority, the majority of Canadians voted for the opposition. They don't want another election, only Harper does because he has the money to run one. He wants an election not to govern but to finally kill the Liberal party, to run a stake thrrough its heart so it will not rise again.
And that is all his political agenda was ever about. So lets not hear anymore about defending democracy, or being best suited to solve the economic crisis, which he denied we were in and still has not offered any solutions for.Or that he is fighting for Canadian unity against nasty seperatists that he was willing to join with to defeat the Liberal minority government of Paul Martin.
Let us understand that Harper and his cronies seek power for its own sake, to mold Canada in their neo-con image. He has pulled off a parlimentary putsch to stay in power. We need a strong coalition to defeat him and replace him in January.
SEE:
In Quebec Everyone is a Nationalist
Jack Layton PM
Harpocrites Declare Class War
Wage Controls
Harpers Bonapartism
The Conservative Dictatorship
Our Great Leader
Harper the Autocrat
Harpers Fascism
Democracy Is Messy
Stephen Harper; Canada's Jekyll and Hyde
The Stalin Circle in Alberta

I got a grant from the federal government for $12,000 in financial aid, see how you can get one also at http://couponredeemer.com/federalgrants/