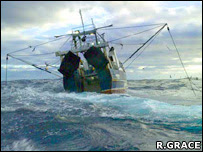 It looks like Iceland and the small handful of bottom feeding nations that use dragger and bottom trawlers won a victory at the UN this week. However I am pleased to say it was without the help of Canada.

Trawling moratorium ends up dead in the water
While New Zealand, the Pacific Island States, the United States, Brazil, India, South Africa, Germany and even previously reluctant Spain and Canada supported stronger action, the desire to achieve a consensus meant Iceland's interests won out over common sense and the science, Fuller said.

Canada at the UN: Don Quixote on the High Seas

The call for a moratorium on high seas dragging has merely brought to the fore a contradiction in Canadian fisheries policy. While on the international stage Canada has consistently adopted a progressive position and pushed for stronger multilateral conservation instruments, domestically the Department of Fisheries and Oceans has not wavered in its support for the destructive practice of dragging. Despite the incontrovertible evidence that dragging destroys critical fish habitat — in flagrant violation of the Fisheries Act — the Department has steadfastly stood behind the practice and the powerful economic interests that benefit from it.

The reasons for this are complex and part of an unresolved domestic debate about how we should be conducting our fisheries within our 200-mile jurisdictional limit. The debate has faded away since we imposed our own Atlantic groundfish moratorium and sold off our industrial groundfish dragger fleet but it will return with a vengeance if and when our cod stocks on the East Coast do recover.

Who was behind Canada's reluctance to support the international accord, well pressure from our domestic trawling industry, the fish packing companies. They were worried that if the UN declaration passed they would be next in line for being banned from using dragging in our domestic waters.

The Fisheries Council of Canada said the resolution “respects the environment and the people who work in the industry.”

Patrick McGuinness, the council's president, said: “Blunt instruments such as across the board bans do not work and, in this instance, would result in the perverse outcome of benefiting flag-of-convenience vessels that disregard all regulations.”

“Responsible fishing nations, such as Canada, will use the resolution to bring forward precautionary and targeted regulations that will govern their fishing vessels when they encounter sensitive areas such as seamounts, concentrations of deep sea corrals, etc.”

Canada has a fleet of bottom trawlers operating within Canadian waters. Its concern has been that a moratorium on the high seas could later be expanded to cover areas within national jurisdiction.

John Risley, founder of Clearwater Seafoods, raised a stir in the scientific community when he said recently in St. John’s, N.L., that there is no proof bottom trawling damages the marine environment.

Mr. Risley said he wasn’t against a moratorium on trawling in sensitive areas of the ocean but said it would be of no use because it couldn’t be enforced.

Ms. Fuller said it’s ironic that Mr. Risley "has funded studies of his hydraulic clam dredging that have come out saying there is a severe impact. Those are published scientific studies."

Ms. Fuller, who has worked with DFO, said she was shocked when a member of the Canadian delegation to the UN talks said Mr. Risley had to be given the benefit of the doubt.

"His comments made me realize how deep this industrial lobby is embedded in DFO."

This week Canada's beleagured shrimp fishery met to consider its future in the face of declining shrimp prices thanks to international competition from the Chinese and Vietnamese fishing industry and the impact of EU tarriffs.
And shrimpers use draggers and bottom trawlers.

It appears that Canada's big fishing industry had the ear of Ottawa in particular the ear of the PM the quy who once called Atlantic Canada a basketcase. And thus they had the support of Loyola Hearn.

Adrift on the oceans issue: It’s time to get serious

Fisheries Minister Loyola Hearn, a Newfoundlander, accepted the warning of the Worm report and shares the Atlantic Canada coastal feeling that something grim is happening. Except that, for him, Canada is already involved in all kinds of initiatives to make things right.

This left him squirming to explain why Canada, then, refused to endorse the UN’s proposed ban on trawling in international waters. The answer, according to my Ottawa informants, is that on the trawler issue, he’s being dictated to by the Prime Minister’s Office. This is apparently a common thing in Ottawa. Even the hapless Rona Ambrose, environment minister, apparently is not as bumbling in real life as she looks when she’s reading the prime minister’s script.

However in an interesting article by Jim Meek in the Chronicle Herald points out all is not lost and that this might be an opportunity to actually reform both our domestic trawling operations as well as those on the high seas. But that would actually mean listening to the fishermen not the big industry players.

This is crucial now – after the United Nations turned thumbs down on Thursday to a temporary ban on high-seas trawling.

In a compromise brokered by Canada and Australia, the world’s fishing nations agreed instead to closely monitor their fleets and to protect sensitive marine areas.

But nothing’s safe in or on the water yet, as Kip Smith would tell you.

Kip is a former trawlerman from Wood Islands, Prince Edward Island. And we’ve been exchanging e-mails since last Saturday, when I endorsed Canada’s position on high-seas dragging. (Let it continue, but more carefully.)

In fairness to Kip, I have to say that he dances with the angels on this issue. He favoured a temporary UN ban on high-seas trawling, and said so in a letter to Prime Minister Stephen Harper.

But as a guy who fished for 20 years, and dragged the bottom for six, Smith also has some practical notions about how to trawl better – and to police the effort.

He tells Harper that conventional "rock-hopper gear" tears through thousands of miles of ocean floor. He’s done it; he’s seen it happen.

But "mid-water trawl gear CAN be used to effectively capture shrimp, cod and other groundfish."

Smith told me the better gear does less harm to the sea bottom, and "to itself." (He’s found common ground for the trawler industry and environmentalists, right there.)

Kip also says scallop trawling is OK on sandy or gravelly bottom. (Again, this is sensible, unless you want to pay $100 a pound for scallops harvested by divers.)

And I figure the UN should take advice from this one sensible man, as it tries to work out this new deal on high-seas fishing.

I’m not pretending this new agreement is perfect.

It places a lot of trust in regional fisheries management organizations (RFMOs) to conserve resources and protect marine habitat.

Fisheries Minister Loyola Hearn even trotted out the odd example of the Northwest Atlantic Fisheries Organization (NAFO), an organization without bragging rights.

Canadian officials insist NAFO is now getting better at its job. But the historic record shows it presided over the collapse of groundfish stocks on the nose and tail of the Grand Banks.

In general, I guess I’d say that Canada can claim a sort of victory this week, but it better stop short of gloating.

It was important to protect the trawling sector – an estimated 40 per cent of the world’s fisheries employ "bottom impact gear."

So finding better, Kip-like ways to fish is the key here – rather than stopping the industry in its tracks.