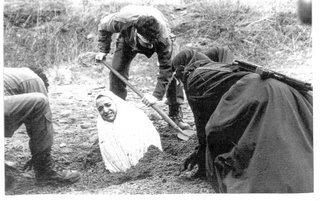 I often see the right wing proclaiming their indignation over events like this, demanding feminists respond, as if feminists ignored the plight of their sisters oppressed by Islam. Well they don't as Maryam Namazie proves. She posted this on her website, which opposes Islamism. I expect all those Blogging Tories tosign this petition. Put up or shut up.


7 women are at risk of imminent execution by stoning in Iran. Sign the petition against it by clicking here.

This outrage has to be stopped now!


A tip o' the blog to Renegade Eye

Posted by EUGENE PLAWIUK at 6:17 PM

Done. My Spanish is a bit iffy, but I understand that the petition said that the signatory agreed that the death penalty was wrong "unconditionally".

Well, for me "unconditional" is a bit of a strong word. For many conservatives, they won't be able to sign such a petition.

Is there an English/French version of this petition? It might be an easier sell.

I looked but couldn't find one. And yes AI position is No Death Penalty. Which I agree with. The history of oppression is the Church and State ability to put people to death not so much for crimes against other but for thought crimes.
The Inquisition, laws against withcraft and sodomy that were hanging offenses in England, etc.

Thank you for linking up to the petition. It might help in this case.

Thanks!
Women In Islam