The Sky Is Not Falling 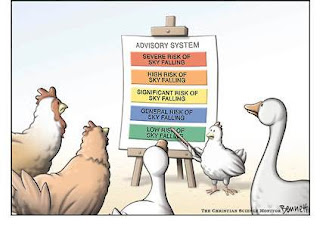 After all the sturm and drang, the wailing and whining, the threats, doom-saying and warnings, from Big Oil the sky did not fall down on Friday after Alberta CEO Ed Stelmach announced his royalty compromise. Ok everyone take a Valium. Capitalism remains alive and well in the oil patch. In fact it is still booming.

Citigroup Investment Research energy analyst Doug Leggate has crunched the numbers, and he just doesn't see what all the fuss is about in the Alberta oil sands over the province's new royalty plans.

The negative after-market reaction to Alberta’s proposed royalty changes for the energy sector appears overdone and may present an opportunity to buy some names in the sector, says Citigroup analyst Doug Leggate.

He recommends keeping an eye on preferred names in the sector like Suncor Energy Inc. (SU/TSX) and Canadian Natural Resources Ltd. (CNQ/TSX), but admits there will likely be a strong response to any change from the industry.

“...Versus the level of oil prices we estimate are currently being discounted in the major Canadian oil sands players, the impact on valuations looks benign,” Mr. Leggate wrote.

So while he acknowledged that the new regime gives away some upside, the analyst thinks plenty of core value remains with investors.

Friday's market response to Stelmach's decision was less dramatic than some experts expected. Shares in Suncor (TSX:SU) opened down 3.4 per cent, while shares in Petro-Canada (TSX:PCA) and Imperial Oil (TSX:IMO)were down less than one per cent.

Petro-Canada's Mr. Brenneman told his conference call that the royalty decision won't delay his company's plans to continue its work at Fort Hills, its 60-per-cent-owned oil sands mine and upgrader project north of Fort McMurray. "We intend to progress this through to the sanction point," he said. He indicated that Petrocan should reach the point where it is ready to make a final decision on whether to proceed with the project in about 12 months.

Petro-Canada's third-quarter profit climbed 14 per cent as oil and gas output surged by nearly a third, the country's No. 4 oil producer and refiner said Thursday.

The company extracts 20 per cent of its cash flow from oil and gas operations in Alberta, and is currently planning the $26-billion Fort Hills oilsands development there.

And if there are market swings they are the result of other factors than the royalty compromise, ironically because of the emissions caps; the Alberta Green Tax as well as labour costs in Alberta's overheated economy.

The downside is that this method of assessing royalties encourages more inflation in this already red-hot economy. There's little incentive to keep costs down on oilsands plants when you have a royalty holiday until construction costs are paid off. The higher the construction costs, the longer the royalty holiday. (After costs are paid off, royalties jump to 25 per cent, rising to 40 per cent when oil reaches $120 a barrel, under Stelmach's proposals.) Yet, it's precisely those rapidly rising costs in construction and labour that are being felt in all sectors of the provincial economy. As Fort McMurray Mayor Melissa Blake says, "we used to call that the Fort McMurray factor -- 30- to 40-per- cent higher price. Now it's all over the province." At this rate of economic growth, her city of 65,000 will have a population of 100,000 in another five years, Blake said in an interview. Good grief.

Suncor has also had to do mechanical upgrades this year and is looking at costs involved in upgrading its refining processes. All part of the day to day cost of doing business. However it's share prices rose despite the minor drop in third quarter earnings.

Suncor cut its oilsands production target for the year and raised cost estimates because of shutdowns and limits on emissions. Alberta regulators capped production from Suncor's Firebag deposit at 42,000 barrels of bitumen a day until it can reduce emissions, the company said. Bitumen is a heavy crude extracted from the tar sands.

Suncor's shares rose $1.46, or 1.4 per cent, to $102.75 on the Toronto Stock Exchange. The stock has gained 12 per cent this year.
Suncor earnings slip as emission caps take toll

Suncor Energy Inc. said Thursday its third-quarter profit fell due to a drop in oilsands sales volumes, and it lowered its production outlook for this year because of maintenance at its oilsands operations near Fort McMurray.

Suncor cut its oilsands production target for the year and raised cost estimates because of shutdowns and limits on emissions. Alberta regulators capped production from Suncor's Firebag deposit at 42,000 barrels of bitumen a day until it can reduce emissions, the company said. Bitumen is a heavy crude extracted from the oilsands.

"We're taking a number of steps to address regulator concerns including accelerating the construction of emission abatement equipment," CEO Richard George said in the statement. "At the same time, we're also examining ways to increase bitumen supply from our mining operations to help offset supply restraints at Firebag."

Mr. George, the company's longtime executive, said Suncor is working towards charting growth beyond Voyageur and Suncor will most likely seek opportunities that do not stretch far from its core oilsands business.

"We're sitting on huge reserves, some of which haven't even been described publicly, and I still think the core and heart of this (company) is going to be the oilsands," he said, adding that tie-ins or joint-ventures between Suncor and companies in the Fort McMurray area looking for upgrading capacity for raw bitumen represents one opportunity.

"Just continuing to build upgraders probably isn't (our growth plan) but I don't want to preclude anything. Will you see Suncor exploring in North Africa of West Africa? Probably not."

"We have leased land outside Edmonton and that is a possibility and we will also look farther south as well," he said, adding costs to build upgraders and refineries in Fort McMurray are more than double those on the refining hub along the U.S. Gulf Coast.

And the impact of Flaherty's Income Trust Tax plays as much a role in Syncrude's profit outlook as does the Alberta Green Tax. So in balance the impact of the royalty increase is only one factor in Syncrude's future forecasting of its production output.

Alberta, Oct 26 (Reuters) - The firm with the biggest stake in the Syncrude Canada Ltd. oil sands venture said on Friday it is willing to talk to the Alberta government on changing Syncrude's royalty structure, but issued a reminder that its terms are part of a legal contract.

Canadian Oil Sands Trust (COS_u.TO: Quote, Profile, Research), which has a 37 percent stake in the sprawling oil sands mining and synthetic crude venture, said its terms have helped prompt C$8.5 billion ($8.9 billion) in Syncrude spending over the past five years and create 5,000 jobs.

Its royalty terms and those of rival Suncor Energy Inc (SU.TO: Quote, Profile, Research), do not expire until the end of 2015. Premier Ed Stelmach has said Alberta would negotiate with the two operations to agree a transition to the new royalty framework.

Canadian Oil Sands Trust units were were off 69 Canadian cents, or 2 percent, at C$32.90 on the Toronto Stock Exchange.

Meanwhile the impact of the royalty announcement has not deterred Syncrude from looking for 5000 workers to meet its current needs and those down the pike.

There's plenty of work to be had in the booming Alberta oilsands, but you've got to be serious about working there.

Fort McMurray, Alta.-based Syncrude was one of the employers on hand at Thursday's seventh annual Career and Skilled Trades Learning Experience (CASTLE) job and career fair, a first for the oil giant.

Staff at the Syncrude table had a list of 21 different permanent positions currently in demand at the company, including plant operators, boilermakers, engineers in all disciplines and information technology analysts.

"About the only thing we don't hire are plumbers and carpenters," said House. "That work is contracted out."

Not only is the oil boom in Alberta causing a labour shortage, but Syncrude faces a host of retirements, with an attrition rate of eight to nine per cent, he said.

Exciting as all this might sound, he was finding few takers at the CASTLE event.

"Housing cost is the number one deterrent," said House.

In labour-starved Fort McMurray, he said, "you can work at a Burger King and make $15 an hour.

"But in order to afford the housing, you'd better work a lot of hours," he added. "A person making $15 could not survive alone."

All in all Stelmach's royalty compromise turns out to not to have been as balanced as he claims it leaves Albertans without a real share in the wealth being created by the extraction of our resources, and it does not even begin to pay for the social costs of the expansion of the oilsands. It is in effect too little too late.

Inflation is also eroding people's earning power. That's the observation of none other than this fall's TD Bank report on the Alberta economy.

"While average incomes have been rising, the bulk of the gains have been enjoyed at the high end of the income spectrum," says the report. People earning more than $100,000 are enjoying rising incomes. That includes lots of oilpatch workers, not just head office middle managers.

People earning $60,000 or less have remained static or slipped back in inflation- adjusted dollars, according to the bank report.

This is also the province with the regressive flat income tax, which means high-income earners pay the same ten per cent as low-income earners. So the tax system does nothing to mitigate a growing income gap.

So Martha and Henry might have a few questions for Stelmach about a royalty regime that keeps the accelerator to the floor.

They might also note that the dire predictions that investors would dump their energy stocks and flee Alberta didn't happen. On the Toronto exchange Friday, the energy sector was up 0.17.