CBC Politics with Don Newman has a new ad on TV. Suddenly the show has become CBC's version of Bill O'Riley and Fox News with this ad quip; "I'm Don Newman, the spin stops here".

Politics with Don Newman taps into the decision makers.
Don brings you the inside look into what is happening in politics: Federally, provincially and the world.
The spin stops here. 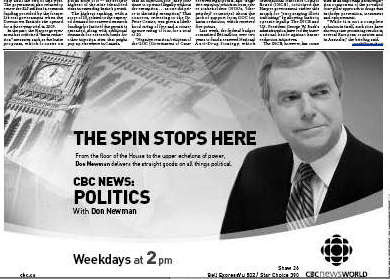 Whoa big fellow that ain't quite truth in advertising. After all even though his business crashed and he is no longer publishing Western Standard, Don still had this guy on last week to talk about Alberta. And he is nothing if not right wing spin.

Of course as I have pointed out before this shows the CBC has given up its apparent "left wing bias" and is now cuddling up to the Conservative right in Canada. Despite right wing assertions to the contrary.

(Fox News Channel is a rare exception, and by no shear coincidence, is where the phrase “the spin stops here” came from before being stolen from Bill O’Reilly’s “O’Reilly Factor” by the state-run CBC).

Ezra Levant Does Not Speak For Me

Posted by EUGENE PLAWIUK at 2:09 AM

I can't understand where people get the idea that the CBC is supposed to be left wing. Outside of a few instances of fresh air like "The Take" produced by Avi Lewis though I don't know if the CBC had any input into this. Even in the seventies I remember we used to think that CBC television news was actually to the right of CTV. Too many talking heads even in those days.

CBC buckled to the right wing years ago after Gzowski died.