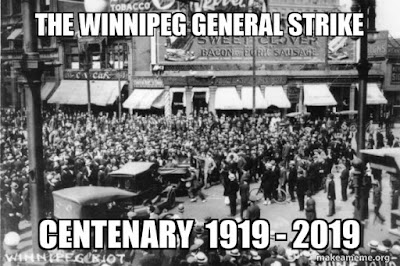 THIS DAY IN HISTORY: 100 YEARS AGO TODAY THE WINNIPEG GENERAL STRIKE BEGAN
MAY 15, 1919 remains the most important date in the history of Canadian workers to date. On that day, 35,000 Winnipeg workers, only one third of them unionized, went on strike in solidarity with the city's metal and construction trades workers who had been striking since May 1 for the right to bargain collectively with employers in their trade. The employers, themselves negotiating as a bloc, refused, insisting that they would only negotiate with individual trades. They wanted to keep their workers divided so as to keep them weak relative to the united employer class.
The day began with the non-unionized telephone operators, the "hello girls," declaring their support for the strike and refusing to work despite employer threats to fire anyone who joined the strike. Later, the "salesgirls" at Eaton's and other stores, all non-unionized, as well as a variety of other non-unionized workers in the public and private sectors joined the unions in withholding their labour. In a city of about 180,000, a majority of families counted someone who was on strike.


A Strike Committee was formed to liaise with Winnipeg city council and the mayor about what essential services would be offered in Winnipeg while the workers continued their strike for just treatment of all workers. At the council's request, the Strike Committee agreed that vehicles used by workers deemed essential would be marked "Authorized by the Strike Committee" so that strikers would not see them as scabs and perhaps harass them. The so-called Citizens' Committee of 1000, which formed to represent the interests of the city's bourgeoisie of owners and professionals, would later distort that label to suggest that the Strike Committee had usurped power to run the city from the city council. The employers were determined to give no concessions to the striking workers and indeed to break the back of unionism in Winnipeg. That would cause the Winnipeg strikers to call for general strikes in other cities in solidarity with the Winnipeg workers. Calgary and Edmonton responded to that call with month-long general strikes, though only unionists joined those two strikes.


The Winnipeg General Strike was the culmination of the frustration that most workers felt in the face of postwar unemployment accompanied by a continuation of the inflation that they experienced in wartime while their pay rates barely rose. They had managed a successful, short general strike in 1918 in the city and won concessions during a time when labour shortages and war needs weakened the position of employers. The Socialist Party, the Social Democratic Party, and the Industrial Workers of the World were all strong in Winnipeg and held huge public meetings to extol the idea of the One Big Union, an organization that would unite all workers and turn every strike into a general strike in order to strike fear into the hearts of greedy employers. The sense that World War I was a war of rival imperialists, not a just war, and that only capitalists had gained anything from it, all at the expense of working people, and continuing poverty, insecurity, and poor working conditions combined with the organizing skills of radicals persuaded most working Winnipegers that they had to take a public stand for social justice for workers.


The strike would be broken by brute state force on Bloody Saturday on June 21, 1919. But on May 15, there was a feeling of exhiliration among Winnipeg workers. They were standing shoulder to shoulder in an effort to tell their employers that they wanted either serious reforms to capital-labour relations or an end to capitalism altogether. They did not want to return to work until wage slavery had been replaced by an economy in which workers had dignity, security, and a say in how their workplace was run
ALSO SEE

The lineups were agonizingly long for the few jobs available in 1919 Winnipeg, a city teeming with a ballooning population and choked by factory smokestacks.

Afraid of losing what jobs they could get, many workers suffered through dirty, dangerous conditions and long days.

Inflation was skyrocketing and so was unemployment as Winnipeg exploded into the third-largest city in Canada, drawing in thousands of immigrants who also made it the most ethnically diverse city in the country.

These were the conditions that set the stage for the Winnipeg General Strike of 1919, an upheaval that brought few immediate gains but seeded the change that resulted in modern workers' rights.

"It was the most dramatic single event in Canadian labour history," author Donald D.C. Masters wrote in his book The Winnipeg General Strike.

A large number of newcomers, hoping for a better life, instead found themselves salvaging scraps of wood and metal to slap together shacks in growing city slums.

"There were many impoverished people in Winnipeg. I think for many Canadians, it would be shocking to see those conditions," historian and strike expert Nolan Reilly said.

Working and living conditions were appalling for many people during the turn of the 20th century in Winnipeg.(Archives of Manitoba)


But something else also was taking root and beginning to flourish in Winnipeg —the union movement.

From 1900 to 1920, the number of unions in the city tripled and demands for a better life for workers steadily grew, said author Paul Moist, a former national president of the Canadian Union of Public Employees.

"Life was hard for the average working-class family in Winnipeg. The general strike gave voice to the frustration felt by many," he said.

"The solidarity of the city’s workers, and their decision to elect strike leaders to a range of public offices, would forever alter and define the geopolitical map of the city."

In Winnipeg in 1917, more days of work were lost to strikes than in the previous four years combined, Moist said.
And while there were gains for workers, they were modest — a few extra cents in pay. 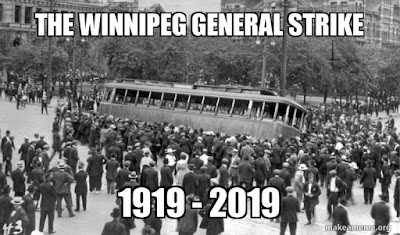 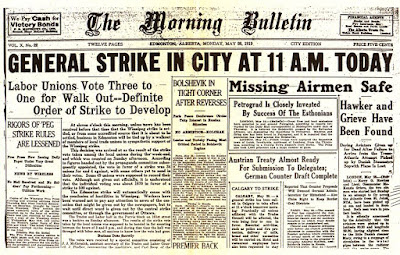