(OF THE IWW AND LATER THE COMMUNIST PARTY USA)


MEMORIES OF THE IWW BY ELIZABETH GURLEY FLYNN


Memories of the IWW by Elizabeth Gurley Flynn

ALSO ON THE WEB AT WOMEN'S SPEECHES FROM AROUND THE WORLD

Transcript of a speech Elizabeth Flynn made to students at Northern Illinois University, DeKalb on Nov. 8, 1962. https://libcom.org/history/memories-industrial-workers-world-elizabeth-gurley-flynn

Yesterday at 6:28 AM ·
Know your rights:
➡️ When stopped by police
➡️ Protesting
➡️ As a student
➡️ To religious freedom
➡️ While incarcerated
➡️ Voting
➡️ If you're facing harassment at work
➡️ When navigating public spaces with a disability
And many more specific scenarios ⤵

ACLU.ORG
Know Your Rights
Everyone has basic rights under the U.S. Constitution and civil rights laws. Learn more here about what your rights are, how to exercise them, and what to do when your rights are violated.

Jun 22, 1976 - The American Civil Liberties Union has decided 12 years, after the death of Elizabeth Gurley Flynn that it was wrong in expelling her from its board of directors in 1940 and has repealed the expulsion. ... In 1920, at a time when she was a leader of the Industrial Workers of the World ...

Since Elizabeth Gurley Flynn was recently elected chairman of the ... She was a charter member of the American Civil Liberties Union, a member of its Board, ...

When They Jailed Elizabeth Gurley Flynn--Bob A. Feldman - YouTube


Elizabeth Gurley Flynn was an agitator and organizer for the Industrial Workers of ... War I Red Scare, and helped establish the American Civil Liberties Union


Flynn was a vehement speaker about women’s rights, including birth control. She was also against World War I, and like most naysayers was charged with espionage. Flynn soon became absorbed with defending immigrants who were threatened with deportation because they opposed the war.
A sense of nationalism was extremely important to the US government during war time, and Flynn had her work cut out for her. Flynn’s first hand involvement caused her to help found the American Civil Liberties Union (ACLU), and she was elected to the national board.
She had to take a break from activism, not from a hostile government or because she rethought her positions, but because of her health.  She also joined the American Communist Party in 1936, and did in fact inform the ACLU before she was elected—there wasn’t a cover up or anything like that—but because of the rise of Hitler, several known communists supporters  were expelled from various organizations, and the ACLU were no different
In 1941 she was elected to the Communist Party’s Central Committee, and then in 1942 she ran for Congress, campaigning on women’s issues instead of the usual men’s issues. She wasn’t successful, but she actually ended up working for FDR for a little bit, and then after the war she was thrown in prison for two years along with a few others for planning to overthrow the government. Once she got out, she was elected to National Chairman of the Communist Party. 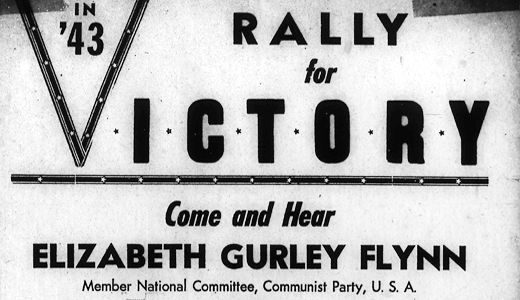 In honor of Women’s History Month, the seventh article in our series on the Communist Party’s 90th Anniversary will survey a few documents written by Elizabeth Gurley Flynn, one of the most prominent women Communists in U.S. history.

Flynn was a labor leader, activists and feminist. At 16, she gave her first speech, “What Socialism Will Do for Women.” For her political activities, Flynn was expelled from high school.

By 1907, Flynn had become a full-time organizer for the Industrial Workers of the World, the IWW, where she helped organize union campaigns among garment workers, silk weavers, restaurant workers and textile workers. In 1920, Flynn helped to found the American Civil Liberties Union, the ACLU, where she helped organize the defense of Sacco and Vanzetti, among other union and labor activists.

Flynn was also concerned with women’s rights. She supported access to birth control and women’s suffrage, and criticized some unions for being male-dominated. In 1936, Flynn joined the Communist Party and started to write for the Daily Worker. By 1938, she was elected to the CP’s National Committee. (It was due to her Party membership the ACLU kicked her off of their board of directors.)

T  The Truth about the Paterson Strike

On January 31, 1914, Elizabeth Gurley Flynn analyzed the Paterson strike in a speech before the New York Civic Club Forum. The manuscript of her talk is in the Labadie Collection. Born in 1890 in New Hampshire, Gurley Flynn joined the I.W.W. in 1906 at the age of sixteen and for the next ten years was a leading organizer, soapboxer, and lecturer for the organization. She was arrested in the Missoula and Spokane free speech fights in 1908 and 1909, was a strike leader in the Lawrence and Paterson textile strikes and the 1912 strike of New York City hotel workers, and was active in the defense of Joe Hill, Ettor, and Giovannitti, and the I.W.W. prisoners arrested under the wartime Espionage Law. After leaving the I.W.W. about 1916, she helped launch the Workers' Liberty Defense League, was active in the Sacco-Vanzetti Defense Committee, and, from 1927-30, was chaiman of the International Labor Defense. In 1937, she joined the Communist Party and in 1961 became chairman of the Communist Party of the U.S.A. Her autobiography, I Speak My Own Piece (New York, 1955), contains a great deal of interesting material on the early organizing and free speech activities of the I.W.W.


Thesis submitted in partial fulfillment of the requirements for the Degree of Bachelor of Arts with Honours in History Acadia University April, 2016 © Copyright by Carlie D. Visser, 2016


This thesis focuses on the early life and activism of Elizabeth Gurley Flynn, a leading female orator and activist for the syndicalism movement of the early 20th century. Emerging as a popular oratorical figure in New York in 1905, Flynn became what theorist Antonio Gramsci would describe as an organic intellectual, emerging from within the working class itself to speak to its grievances and articulate a vision of social justice. This thesis seeks to foreground the hybridity of Flynn’s involvement in Progressive Era social activism by highlighting her connection to both the world of radical labor unionism and the sphere of socialist and progressive American thought. As a writer, orator, and thinker, Elizabeth Gurley Flynn worked to bridge the internal divisions of the working-class and build unions predicated on class-based solidarity that would lead to fundamental social and economic change. In addition, Flynn was a labor feminist who believed that women’s economic independence could not be separated from the movement for her political and social equality. As a representative figure and a singularly significant working-class intellectual, Elizabeth Gurley Flynn warrants the attention of those who seek to better understand how women, labor, and dissident thought intersected in the democratic challenge to industrial capitalism

Heroine of the Working Class

There are very few Americans who remember Elizabeth Gurley Flynn. Those who do will certainly note that she was a faithful Communist Party member from the 1930s until her death in the Soviet Union in 1964.
Even so, as Lara Vapnek makes quite clear in her spirited, sympathetic and enlightening biography, long before she ever signed a party membership card, Flynn was not just another communist apparatchik or commonplace left-winger. She was, instead, a genuine heroine of working men and women in their early twentieth century struggle against tone-deaf corporate power and hostile courts and governments.
Indeed, in this latest in the valuable “Lives of American Women” series, Vapnek, a St. John’s University historian, sees a complex Elizabeth Gurley Flynn who has been overlooked and forgotten, most likely because of her politics. Helen Camp’s 1995 biography “Iron in Her Soul” is a more thorough treatment of Flynn’s life but Vapnek’s slender volume doesn’t miss a beat as she skillfully revives the memory of this Irish-American radical.


Born in 1890 of impoverished immigrant Irish socialist parents in New Hampshire and reared in The Bronx, she inherited her family’s political views. For them, the answer to why so many lived lives of powerlessness and poverty had been explained by Karl Marx, whose “scientific” approach pointed to the class struggle as a way out. For her parents and herself, the culprit was unbridled, unregulated, capitalism and its political and governmental lackeys.
Posted by EUGENE PLAWIUK at 6:18 AM