NEWPORT, Ore. - Oregon State University researchers who recently discovered a population of blue whales in New Zealand are learning more about the links between the whales, their prey and ocean conditions that are changing as the planet warms.
Understanding how changes in climate affect the ability of blue whales to feed gives researchers more insight into the whales' overall health and provides critical information for conservation and management, said Leigh Torres, an assistant professor and director of the Geospatial Ecology of Marine Megafauna Laboratory at OSU's Marine Mammal Institute.
"These whales don't move around at random. We found that the same ocean patterns that determine where whales are also determine where their prey are, under both typical and warm ocean conditions," Torres said. "The more we learn about what drives these whales' movement, the more we can help protect them from whatever threats they face."
The researchers' findings were published today in the journal Marine Ecology Progress Series. The study's lead author is Dawn Barlow, a doctoral student in Torres' lab; additional co-authors are Kim Bernard of OSU's College of Earth, Ocean, and Atmospheric Sciences; Daniel Palacios of OSU's Marine Mammal Institute; and Pablo Escobar-Flores of the National Institute of Water and Atmospheric Sciences in New Zealand.
Torres, Barlow and colleagues recently documented this new population of New Zealand blue whales, which is genetically distinct from other blue whale populations and spends much of its time in the South Taranaki Bight between New Zealand's North and South Islands.
"The goal of our study is to understand the habitat use patterns of this population of blue whales - why they are where they are and how they respond to changing ocean conditions," Barlow said. "We know this area is important to this population of whales, and we want to understand what it is about this spot that is desirable to them."
The region is often rich in prey - blue whales feast on patches of krill - but the prey is patchy and influenced by changing ocean conditions, including warmer temperatures and changes in ocean properties. The South Taranaki Bight also sees frequent shipping traffic and activity from oil and gas exploration and production, Torres said.
Using data collected during typical summer conditions in 2014 and 2017 and warmer than average conditions in 2016, the researchers analyzed how changing ocean conditions affect the blue whales' distribution in the region's waters and the availability and location of their prey within the water column.
They found that during a regional marine heat wave in 2016, there were fewer aggregations of krill for the whales to dine on. With fewer options, the whales pursued the densest aggregations of krill they could find, Barlow said. 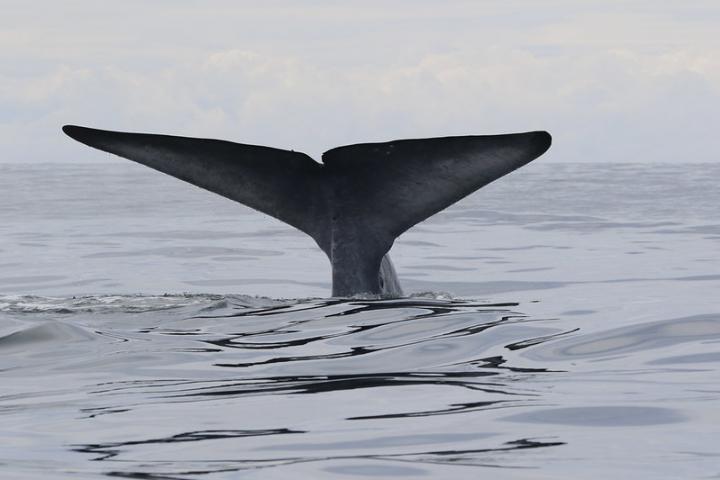 The researchers also found that during both warm and more typical ocean conditions the whales were more likely to feed in areas where the water was cooler. During the marine heat wave, when even the coolest water temperatures were higher than normal conditions, the whales still sought the coolest waters available for feeding.
In this region, cooler water temperatures represent deeper water that was pushed toward the surface in a process called upwelling and tends to be nutrient-rich, Torres said.
The nutrient-rich water supports aggregations of krill, which in turn provide sustenance for the blue whales. In their study, the researchers were able to bring all of the pieces of this trophic pathway together to describe the relationships between oceanography, krill and whales.
As warmer ocean conditions become more frequent, this new knowledge can be used to inform and adjust spatial management of human activities in the region in an effort to reduce impacts on New Zealand blue whales, Torres said.
"Documenting information like this can really help us understand how to reduce threats to these animals," Torres said. "We need continued monitoring to understand how these whales will respond to both the changing climate and human impacts."
###
Posted by EUGENE PLAWIUK at 4:44 PM