behind myths of ancient


Hippolyta, Antiope and Penthesilea. These are the names of Amazonian women warriors made famous in folklore, thanks in large part to male Greek storytellers like Homer and Herodotus. In some archaeological digs in Eurasia, as many as thirty-seven per cent of the graves  contain the bones and weapons of horsewomen who fought alongside men 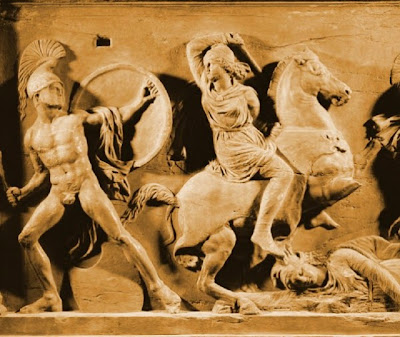 
They were huntresses, founders of cities, rivals and lovers of adventurous men. They battled the Greek hero Heracles and fought alongside the Trojans in the final hours of Troy. And yet, they are widely held to be little more than figments of Greco-Roman imagination. But warrior women actually existed, according to Stanford's Adrienne Mayor, a research scholar in the Department of Classics. In her new book, "The Amazons: Lives and Legends of Warrior Women Across the Ancient World," Mayor explains the real-world underpinnings and history behind the Amazonian folklore. In Hellenic legends, as Mayor learned, Amazons often faced defeat and death at the hands of male Greek heroes. Yet the storytellers also described these female foreigners as exceptionally heroic, civilized and worthy counterparts to the Greek champions. "Amazons were modeled on stories of self-confident women of steppe cultures who fought for glory and survival and enjoyed male companionship," but, as Mayor puts it, "on terms that seemed extraordinary to the ancient Greeks." The hereditary stories left quite a mark on the Greeks. "The popularity of Amazon stories and images suggests that Greek women and men enjoyed imagining heroes and heroines interacting as equals and seeking adventure and glory in hunting and battle," Mayor said. 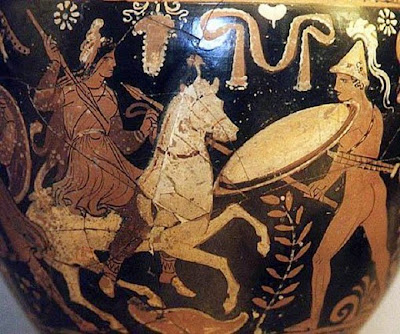 Mayor began her investigation by amassing all the surviving ancient Greek and Latin accounts she could find that told of encounters with Amazons as well as "warlike, barbarian" women who behaved like Amazons of myth. The texts described them as members of nomadic tribes roving the territories that the Greeks collectively called "Scythia" – a vast expanse between the Black Sea and Mongolia – from the seventh century B.C. until the fifth century A.D. She proceeded to research the Scythians – Eurasian steppe peoples who cultivated a mastery of horseback riding and archery for thousands of years. Mayor consulted early European travelers' reports and ethnographical materials as well as contemporary descriptions of steppe life, comparing the latter to ancient Greek knowledge and speculation concerning the identity of the Amazons. Mayor also analyzed physical evidence – including "actual battle-scarred skeletons of women buried with their weapons and horses" – and she corresponded with the Hermitage Museum in St. Petersburg to learn how researchers there used infrared cameras to reveal invisible tattoos on frozen female Scythian mummies from more than two millennia ago. "Their tattoos of deer and geometric designs resemble the tattoos and patterns on Amazons depicted in ancient Greek vase paintings," Mayor said. Furthermore, Mayor was able to collect and verify lesser-known tales and reports (such as a newly translated Egyptian papyrus in Vienna) that showed warrior women were the subject of much fascination in cultures beyond Greece – Persia, Egypt, Caucasia, Armenia, Central Asia, China and among the steppe peoples themselves. Examining the corroborating evidence, Mayor found that "real women warriors lived at the time that the Greeks were describing Amazons and warlike women of exotic eastern lands." She even determined that there was even more respect and exaltation for women warriors in the non-Greek traditions that stretched from the Black Sea to China. In these non-Greek stories, she said that male and female enemies were so equally matched that neither could win: "Instead of ending in doom for the woman, the former foes declare their mutual admiration and decide to become companions in love and war." 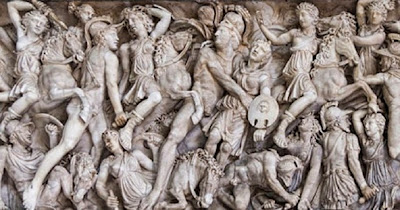 A battle between Amazons and Greek warriors is depicted in a marble sarcophagus  on display at the Pio Clementino museum in the Vatican  [Credit: Colin/WikiCommons]

Gender dynamics While Greek heroes usually defeat Amazon women in their mythic narratives, the triumphs are depicted as hard-won from worthy rivals. As Quintus of Smyrna described the tragically slain Queen Penthesilea in The Fall of Troy, "All the Greeks on the battlefield crowded around and marveled, wishing with all their hearts that their wives at home could be just like her." "After Heracles, Amazons were the single most popular subjects in vase paintings of myths," Mayor wrote. Artistic Greek objects of all sorts, crafted for men, women, boys and girls, underscored that admiration for the Amazons transcended gender and age groups. Mayor's exploration of the subtler gender dynamics within the Scythian culture is reflected in her linguistic analysis of the Greek name for this people, Amazones antianeirai. Homer's Iliad offers the earliest reference to the Amazons in the eighth century B.C., using the full designation Amazones antianeirai. 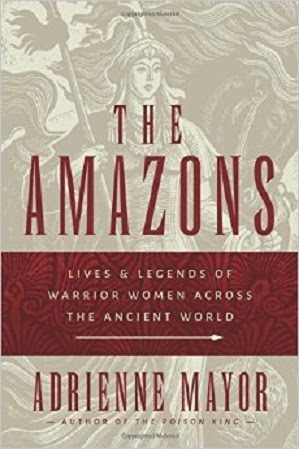 Mayor counters the popular modern translations of antianeirai as "opposites of men" or "against men," pointing out that in ancient Greek epic diction, the word would more ordinarily translate to "equals of men." Scythian culture, she explained, was not a purely female-dominated society. Instead it afforded a greater range of roles to women and promoted parity between genders. Scythian women often dressed in the same clothes as their male brethren and often joined them in battle – helping them thwart forces such as those of Cyrus the Great and Darius of Persia. For example, the "Nart" sagas, Scythian oral traditions of the Caucasus passed down to their descendants, hold great praise for their women warriors, as led by the valorous Queen Amezan: "The women of that time could cut out an enemy's heart … yet they also comforted their men and harbored great love in their hearts." The sagas point to the possibility of a Caucasian etymology for the Greeks' nomenclature of "Amazon." Mayor's work also clears up confusion over whether the word signifies women who sacrificed a breast to become better archers: "The single most notorious 'fact' often used to describe Amazons is wrong … The origins of the 'single-breasted' Amazon and the controversies that still surround this false notion are so complex and fascinating that Amazon bosoms have their own chapter,"  Mayor said.

You could be eligible to receive a $1,000 Amazon Gift Card.