No attack ads need to be created to defeat Stephen Harper this election, he has done it too himself.

Stephen Harper and his government; the Harper Government (c)(tm)(r) were found in contempt of parliament. a fact he continues to dismiss.

The fact is his is the first government ever to fall because of a charge of contempt of parliament, and he cannot dismiss that historical fact!

This is the first time a Canadian Government has fallen on Contempt of Parliament, and marks a first for a national government anywhere in the Commonwealth of fifty-four states.

Then he was exposed as a Liar on day one of the election when he claimed that creating a coalition government to replace a minority government that had lost the support of Parliament was 'illegitimate'. Conveniently forgetting that is exactly what he proposed to do in 2004.

Duceppe's message is clear: Harper is a liar

So when it comes to issues of trust and ethics, after five years the Harpercrites have caught up with the Liberals, who fell after 13 years in power because of these kind of ethical failures.

So folks if you don't like Steve and his politics or his political cronies, like Bruce Carson, then just get out those felt pens and add 'contemptible liar', to any Harper posters you see, after all its called truth in advertising for a reason. 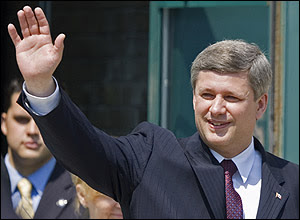 Even as Prime Minister Harper gave his somber faced farewell speech in the lobby of the House of Commons last Friday, he refused to acknowledge why his government was defeated. By thus refusing, Harper ironically piled on even more contempt for Canadians and their right to know how this government operates. He gave his typical, unimaginative speech attacking the Opposition parties for calling an election, for which the Conservatives have already spent $26 million of taxpayer money in pre-election spending.

If you look back at Harper’s 5 years in power, almost always he has tried to govern as if he had a majority. He has kept information secret not just from parliament but also from the media. Look at the Afghan prisoner debacle, the refusal to stick to his fixed election policy, the secret plan to build mega prisons with a failing crime rate. The list goes on.

Harper’s decision to prorogue parliament should give him the title as King of Contempt. To use a parliamentary statute to protect the Conservative party from defeat in the House has to be one of the most cowardly acts of his tenure. Another irony is, of course, that his popularity actually increased while the House was being prorogued and was empty. As the polls concluded at that time, parliament was irrelevant to Canadians. And that’s the way Harper likes it. He does not want to answer to Canadians.

Posted by EUGENE PLAWIUK at 1:30 AM

I came across a nice quote while re-reading Randall Gould's great China memoir China in the Sun the other day. Gould was a veteran member of the old China press corps before the war.

Best Chat Up Line In A Night Club……
Boy to Me: Are those fake Eyelashes…
Me: No they are my Own…
Boy: Shut Up!! Close your eyes so i that i coud see…
Stupid Me Closed My eyes and He Kissed Me!!!!!
( just a joke )
buy wow gold
wow gold
cheapest wow gold
RS Gold
buy runescape gold

Harper’s choice to prorogue parliament should undoubtedly give him the name as King of Contempt.
When you felt boring or have nothing to do? What should you do to spend the free time? How about the game? like to win Tera Gold in Tera, and how to Buy RS Gold with less money, is there anyway to get the Cheap Tera Gold for us? We need to think about this.

He gave his typical, unimaginative speech attacking the Opposition parties for calling an election, for which the Conservatives have already spent $26 million of taxpayer money in pre-election spending.
las vegas escortscheap sexy lingerie

Once again great post. You seem to have a good understanding of these themes.When I entering your blog,I felt this . Come on and keep writting your blog will be more attractive. To Your Success!

heir clients are also stating the same thing once they attempted this technique out.our company is quality with free shipping,so just act now and buy Cambridge Satchel and Cambridge SatchelsNevertheless, it just helps you pick wiser numbers as well as improve your like

Very excited about meeting everyone today at the Business Design Centre in Islington. We'll have over 400 photographers in my class today, and I'm totally psyched to take this tour out with a bang in one of my favorite cities in the world. Hope to see you there! Cheers.

Then he wasCheap RS Goldsubjected as being a Liar on day time one unique faraway from your election when he claimed that producing a coalition federal government to swap a minority federal government that experienced dropped the service of Parliament was 'illegitimate'.Buy WOW Gold Conveniently forgetting that is precisely what he proposed to undertake in 2004.

Very excited about meeting everyone today at the Business Design Centre in Islington. We'll have over 400 photographers in my class today, and I'm totally psyched to take Launch x431 this tour out with a bang in one of my favorite cities in the world. Hope to see you there! Cheers.